On and off the stage at Broadway's Nightclub 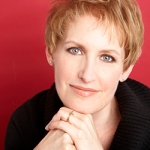 A chat with Tony Nominee and Emmy Award-winning actress, singer and recording artist Liz Callaway.  She made her Broadway debut in Stephen Sondheim’s Merrily We Roll Along, received a Tony Award nomination for her performance in Baby, and for five years, won acclaim as Grizabella in Cats. Liz also starred in the original casts of Miss Saigon, The Look of Love and The Spitfire Grill, and provided the singing voice for numerous animated features including the Oscar-nominated Anastasia. With a busy concert career that takes her throughout the world, New York audiences are fortunate indeed to have her in residence this Fall for seven very special performances only beginning November 7th, 2012.

More information and tickets at 54below.com